Why You Should Increase The Liability on Your NC Auto Insurance

More and more these days, I find myself saying “Insurance is not a commodity”, as much as Flo, the Gecko, Jake, or Peyton Manning want you to believe it is.  We really have slipped into a world of putting the price before the product, which is fine if you are buying jeans, but not lawsuit defense.  Your NC auto insurance should be viewed as more than a necessary evil required by the DMV.

What gets forgotten is that your NC auto liability insurance is the only thing standing between you and a lawsuit or coverage to pay for your own injuries and losses.  With that in mind do you really want to head out and find the cheapest thing going?

Don’t get me wrong here.  No one should be needless overpaying.  That is, in fact, one of the greatest benefits of an Independent Insurance Agent; options.

Your NC auto insurance does not have to be expensive or overpriced, but remember you get what you pay for.  Bragging about having your auto insurance payments below $30/month usually means one thing, there is not very much coverage on the policy.

Speaking of things being more expensive than they need to be… Movie Theater Popcorn is insane these days… So random, but so true! 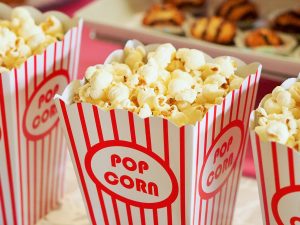 The following is a very true story and the accident happened less than a mile from our office over the summer.

A Tale of 2 Claims

When my client’s daughter was t-boned by a utility company truck, they had no idea how the other drivers NC auto insurance policy would respond.  When the light turned green she pulled out into the intersection and thats when a utility truck ran a red light and smashed just in front of her driver’s door (thank goodness it was a foot or two back).  Her car caught on fire from the impact and her leg was pinned in-between the steering wheel and the seat.  At this point things could have gotten really ugly, but luckily another driver was able to get her door open and pull her out.

Fortunately neither my client’s daughter or the utility company’s driver had life threatening injuries.  Both went to the hospital and were released.  But this is where this accident could have gone in a completely different direction.

The utility company self insured, which means they pay their own claims.  This turned out to a true blessing.  The company responded quickly and made every effort to replace the destroyed vehicle, even going beyond and paying more than anyone expected.  The client was able to get into another vehicle quickly and without any financial burden at all.

Truly, this is very rare.

The settlement for her injuries is ongoing as it has affected her life in more than one way.  She wasn’t able to attend the college she had a scholarship to because of her knee injury, her sleep has been disrupted since the accident due to ongoing back pains and she will have what looks like permanent scarring.

I have a really good feeling that this company will do everything they can to take care of my client, based on the way they handled the property portion of the claim.  It is a massive relief and a very bright outlook of healing and recouping the lost opportunities.

This does not happen, often.  At all.

BUT, what if things had been a little different?  What if the truck that hit her was not self insured by a multi-million dollar company?  The outcome could have been much different.

The minimum requirement for an NC auto insurance policy is $30,000 per person and $60,000 per accident for bodily injury liability and $25,000 for property damage.  With that in mind lets play out how this accident could have looked…

When my client’s daughter was t-boned by a utility company truck, they had no idea how the other drivers NC auto insurance policy would respond.  When the light turned green she pulled out into the intersection and thats when this large truck ran a red light and smashed into her driver’s door.  Her car caught on fire from the impact and her leg was pinned in-between the steering wheel and the seat.  At this point things could have gotten really ugly, but luckily another driver was able to get her door open and pull her out.

Unfortunately, the driver of the truck only carried the minimum limits offered on an NC auto insurance policy.  His auto insurance only offered to pay a max of $25,000 for their car, which to fully replace and not cause any financial setback would have been closer to $45,000.

Her injuries and financial losses also far exceeded the other driver’s policy.  This left her having to file a claim for uninsured motorist coverage and even that didn’t satisfy the amount of the loss.  After consulting an attorney, they decided to sue the other driver.  The process of a lawsuit was quite lengthy and after winning at trial, the judge awarded my client a judgement.  However, it took months and months to see any money, and in the meantime the medical bills were pilling up and really damaging her credit.

Instead of getting the money needed to pay for her medical bills and lost opportunities in school, she has been put in a terrible situation in being in debt and having her credit wrecked by past due bills.  Instead of focusing on healing and moving forward, she is stuck by this major setback that will certainly alter her plans for the future.

While we are talking about Liability Coverage to others, it’s equally important to consider the level of coverage for your Uninsured and Underinsured Motorist Coverage.  The best way to think about this insurance coverage is think “Reverse Liability Coverage”.  In other words, when someone else is at fault and causes Bodily Injury or Property Damage to you or any of your passengers, Uninsured and Underinsured Motorist steps in to pay you.

I think it’s equally important to keep BOTH higher.

So What Is My Point?

Your NC auto insurance isn’t just a bill to be paid.  It’s the only thing standing between you and a lawsuit.  When you fall prey to the loud voices that spend billions on advertising to let you know they have the cheapest thing going, it’s really you that could lose out if you get sued.

The most interesting fact about this is increasing this coverage does not cost a lot.  In many cases $10-$20 month will get you up to a suitable level.  If you can’t afford that, can you afford to get sued and pay for your own defense attorney?

In a lawsuit, they can and will seize your assets and garnish your wages if your insurance isn’t enough to cover the person or persons you injured.  That’s not something your are likely to hear from the Gecko, Flo or Peyton Manning.

Insurance isn’t a commodity and it isn’t a contest to see who can get the cheapest rate.  It’s the only thing standing between you and a lawsuit and it’s time everyone treats it as such.

Are you ready to save time, aggravation, and money? The team at The Juengel Agency is here and ready to make the process as painless as possible. We look forward to meeting you!